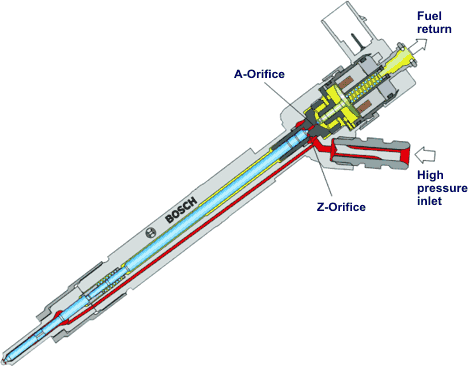 An example of a servo controlled electrohydraulic common rail injector is shown  It consists of an injector body similar to a conventional nozzle holder, a multi-hole nozzle, a valve body with two orifices (A and Z) controlling the pressure in the control chamber, a corresponding control piston, an armature device with a small ball to open and close the throttle containing the A-orifice and a solenoid-coil assembly and the electrical connection for the ECU.

In the common servo controlled electrohydraulic design, the needle valve is operated by adjusting the pressure differential between the seat (lower side) and the top of the valve by utilizing a small electrically actuated control valve mounted above the needle. This is discussed in more detail elsewhere. The control valve actuator can be either an electromagnetic solenoid or a piezoelectric stack [Egger 2001] and the control valve may be a two- or three-way design and may or may not be pressure balanced.

· a reduction in pressure bias forces that enables the use of a lower force solenoid actuator at higher injection pressures that might otherwise need a more compact and expensive piezoelectric actuator.

· small overall size. Some designs for passenger car fit an envelope of 17 mm in diameter and allow the solenoid and nozzle control valve to be placed much closer to the injector nozzle and reduce hydraulic lag times.

· low moving mass that reduces the impact force and subsequent wear on the nozzle seat when the nozzle closes.

Your cart is currently empty.