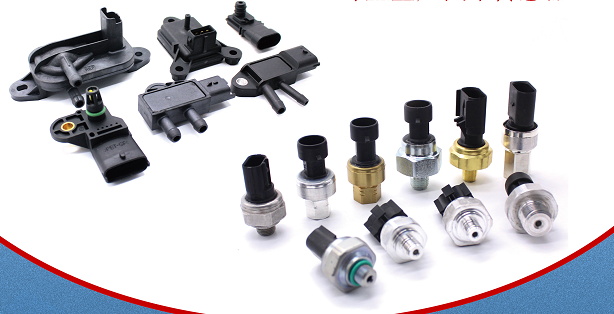 WHAT ARE CAR SENSORS?

Starting back in the late 80s and early 90s, almost every function of vehicle engines and drivetrains has been controlled by a central processor and a chain of sensors. That includes things like:

Engine functions that were once performed by mechaical or electromechanical assemblies like the carburetor, distributor, vacuum spark advance, and throttle kickdown linkage are all governed by sensors and the drivetrain computer today.

Let's take a quick look at what some of these sensors are, and what they do:

Located in the exhaust stream, usually near the exhaust manifold and after the catalytic convertor, the oxygen sensor (or O2 sensor) monitors the content of exhaust gases for the proportion of oxygen. The information is compared to the oxygen content of ambient air and is used to detect whether the engine is running a rich fuel ratio or a lean one. The engine computer uses this information to determine fuel metering strategy and emission controls.

The engine speed sensor actually measures the rotational speed of the crankshaft itself in RPMs. It's a Hall effect sensor, with a serrated disk and magnetic coil; as the crank spins, a current and magnetic field are set up around the coil, and the disk disrupts the field. These disruptions serve as a “count" of RPMs. Problems with the engine speed sensor could show up as cruise control or speedometer issues, or possibly fuel and ignition problems.

The MAF sensor is located near the air filter and monitors the amount of air that enters the engine. The drivetrain computer then uses this information to help determine fuel metering and delivery. A failing MAF sensor will result in rich or lean running conditions, rough idle, hesitation, or stalling, as well as an illuminated "check engine" light.

Warmer fuel is less dense and will ignite more readily, while colder fuel is denser and harder to burn. The fuel temperature sensor sends this information to the engine computer—if the fuel is warm, the injectors will deliver more fuel to reach a certain level of mass, and will retard timing. The opposite is true for colder fuel. A failed fuel temp sensor will result in an illuminated "check engine" light and a drop-off in fuel economy.

On the earliest vehicles, the manifold vacuum was used to govern various processes (and even to power things like windshield wipers!). Today, the MAP sensor tracks vacuum at the intake manifold, helping to indicate engine load. The computer then uses this to map out spark advance and fuel delivery.

There are many more engine control sensors and processors throughout the engine and drivetrain, but these are among the most crucial to drivability, performance, and emissions controls. A signal that's out of normal parameters from any of them can be enough to trigger a trouble code in the engine computer and illuminate the "check engine" light.

A good technician must know how to connect the dots and figure out what went wrong to cause that out-of-norm reading. Nine times out of 10, it's not the sensor itself that's causing the problem.

The conventional definition of sensors describes them as “devices that transform physical quantities such as pressure or acceleration into output signals that serve as inputs for control systems” [Norton 1989]. Automobiles and heavy vehicles have a number of sensors installed in the powertrain, body and chassis. New, sophisticated strategies for the control of vehicle powertrain and emission systems have been driving not only the use of new types of sensors, but also new sensor concepts and functionalities. As a result, the above definition can no longer adequately capture all of the “sensors” used in modern automotive applications.

In automobile engine applications, sensors are used not only for control purposes but also for diagnostics. Modern engines must control a wide range of parameters in order to meet emission standards. These parameters include: fuel injection amount, air flow, EGR, intake air temperature, engine temperature, exhaust oxygen content, exhaust temperature and so on. To meet these control objectives, a wide range of sensors are used. A further challenge in modern automobiles is that exhaust emissions must be maintained over the useful life of the vehicle. In order to achieve this objective, the control system must have diagnostic capabilities to identify any malfunctions not only in sensors themselves but also in critical emission control devices that could cause emissions to increase. This also requires a variety of sensors. In many cases, the same sensor can be used for control and diagnostic functions. However, some sensors can be used strictly for diagnostics or strictly for control.

Another concept not adequately captured in a conventional definition of sensors is the concept of virtual sensors. Virtual sensors are not actually physical sensors but software routines that use inputs, usually from physical sensors, to estimate the value of parameters that are either difficult to measure adequately with existing sensor technology or for which no adequate sensors exist.

Following figure shows the basic components for a modern diesel engine’s air management system, including sensors, with a HPL EGR system . This hardware arrangement would be typical for many modern light- and medium-duty diesel engine applications. The inlet air passes through an air filter and mass airflow sensor before it enters the turbocharger compressor. The compressed air is then cooled by the air-to-air intercooler, and mixed with the cooled EGR gases. The state of this compressed and heated air/EGR mixture is sensed by the MAT (manifold air temperature) and MAP (manifold absolute pressure) sensors just before it enters the cylinders. The exhaust gas pressure is measured by the exhaust backpressure (EBP) sensor before it exits through the turbocharger. In this example, the variable geometry turbocharger is called an Electronic Variable Response Turbocharger (EVRT) and uses an electronic control valve to control oil pressure to position the vanes and determine the effective size of the turbine housing to meet backpressure requirements.

Sensors. In order to control EGR with the required precision and accuracy, signals from a variety of sensors such as those shown in Figure 1, are required. Real sensors that measure common parameters such as temperature, pressure and flow or virtual sensors can be used. Some common sensors used for EGR control include:

·        Temperature Sensors. Intake manifold and EGR temperature can be measured with commonly available temperature sensors. If the engine is equipped with a mass air flow meter, it often incorporates a temperature sensor that can provide a measurement of pre-compressor intake air temperature. In the temperature range of -50 to 150°C, silicon IC sensors are commonly used while for temperatures up to 1000°C, thermistor-type sensors are available. Virtual sensors can also be used to estimate temperature in particularly challenging locations such as at the turbine inlet [Xin 2011].

·        Flow Sensors. A number of flow parameters are critical for EGR control.

o   Intake air flow at the compressor inlet can be measured with a mass air flow (MAF) sensor—these can use a hot wire, hot-film or thin-film type sensing element. Modern designs are able to detect flow direction to accurately account for flow reversals. These sensors are common for light- and medium-duty applications. However, there are challenges to using these in heavy-duty applications including inadequate durability. Most MAF sensors also incorporate an air temperature sensor.

o   EGR flow can be measured with a flow sensor or a virtual sensor that uses EGR valve position and pressure drop as inputs. Venturi-type flow meters as well as orifice plates have been used for direct EGR flow measurement.

o   Intake charge flow from the intake manifold to the cylinder can be determined with a virtual sensor based on the speed/density approach, Equation (1) below.

·        Position Sensors. EGR valve and variable geometry turbine vane position sensors are also important system signals that can be required for EGR control. EGR valve position sensors can be based on a variety of principles including potentiometers and Hall Effect sensors.

·        Gas Composition Sensors. Exhaust Gas Oxygen (EGO) and NOx sensors can also serve a useful function in controlling EGR in diesel engines. Diesel engines operate with excess air so that the switching-type EGO sensors for stoichiometric gasoline applications are not commonly used. Wide range EGO sensors use a ZrO2 solid electrolyte and oxygen-pump electrochemical-titration to measure air-fuel ratio over a wide range. Sensors to measure NOx are similar but include additional features to first remove excess O2, then dissociate NOx into N2 and O2 and then pump the resulting O2. Sensors to measure intake manifold oxygen concentration have also been developed.

Your cart is currently empty.